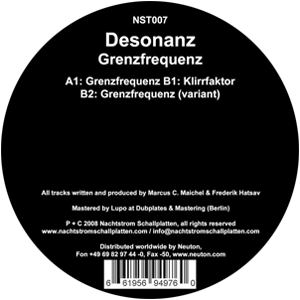 What the pleasantly surprise when I was find out that Desonsnz are actually Marcus (Delta) and Frederik (Metalogic). Nice to see that some projects like them united forces and acknowledge to make one great new project. Nachtstorm Schallplatten, do not stp with surprises. Again one pure sugar of release. I see some great choice of artists there. That is the reason why I have all releases from that label.

Side A: Grenzfrequenz
Night....soooo night sound. Deep and hall! Just kind of warning "Better stomp or i will grab You" It's so minimal on the start of this composition. I like that cause in minimal style of production You have all elements that is so enough to lead You on the dance floor and on the other hand You can hear how much is clean sound and production which is very important even for just consumers, cause no one like to listen crappy sound, and this style is so non compromise in that view. Everything must be like crystal. You better feel that what I talking about on great sound system (Ageha!!!).
Pad on break is great totally. So dark but mystic. And reminds me on old documentary movies with science fiction theme, back in '80. Great track.

Side B1: Klirrfaktor
I must say that I more prefer track introduction on the ways like this track have then some pad and effect intro. That's cause on this way, with the rhythm, track is more friendly for ordinary consumers as much as for DJs just on different way. And massive!!! Start. Right away with lot of channel pump on the same time. Cool! Nice. Repetitive theme with rhythm oscillation. This is cool to. Well the thing which is not cool for me is that wind effect with cut on volume of sound (in producers slang something like side chain effect). That part I don't like is the fact that track is too short on my opinion. I would leave rhythm alone till the end.

Side B2:
After few second leaving kick alone on start of song, bassline have better effect on brain. So start is very good. It's familiar that lower frequency have a addicted influence on brain, and this bassline work that job very good. Especially on break part of track where it becomes more open wide. Excellent groove on rhythm and so much energy. Also repetitive theme which I like a lot. This would be a great tool track with mixing some melody on lead or pad. Kind of I already heard something imaginary in my mind.
Super work!

New project, new release on relative new label and all that from all good producers of techno sound. Very good work and I think that this vinyl will be one of the great sets makers. Just keep going!!! 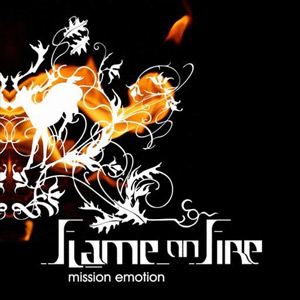 While I surfed on internet,i found one interesting label, Dance n Dust from Israel. I went to their official web presentation and found that everything is about some progressive music with combinations of trance and house with brighter and deeper tribal themes. Under the upcoming and new releases, I saw the title: "Flame On Fire - Mission Emotion" and I decided to try to find out what is behind samples which I found interesting. After finding an album, I began with listening.

1. Resthold Tail
Progressive rhythm is introducing album with a very same style. I like a lot parts with groovy bass.In the backround you can hear motives of morning sound that, with every new level, rises and enters in the main theme which slowly appears.Here's that moment which I usually do - I'm describing track while I'm listening to it and i must say that i understand it much better then any time before. Totally calm and with plenty of repetative digits. Perhaps,it would be better that they played more with reverb motives on some parts and channels,but that is totally a matter of expression of those who compose,so this statement is a thing of personal taste.

2. A Reason A Key And Few Words
At first moment I thought that kick is maybe a little impetious and stronger but when bass came in and other acoompanying elements that are started, I found that everything is on its place.I liked very much dance of timpani around the rhythm. Darker bass part...mmmm my coup of tea. Casuall basslines breaks are "cat's whisker" because they left rhythm "naked" at which stick kongs that gives groove to rhythm. After bassline entered, story that rhythm starts on every 4 steps and stops then begin and so alternately couple times is very cool. Old school,but again in today way of arrange-very nice trick.All in all,I respect it.Track is extremely deep and it has some tribal moments.The most interesting is the fact that this track can be presented on open air or club,whether is day or night.For me,it will be good at any moment.Neither is attacking track,nor hysterical.As track before-calm,easy and goes.Target hit!

3. Feel of Drum
I don`t know if I am wrong, cause I am not a producer,so I can`t say with 100% sure from which synth this sound is,but in many cases i heard this crash which rhythmics of this track begins.They say that is from TB909.No matter from which synth this came from - its great.Very crisp and sharp. Old school, as I already said today. My favorite.Also deep moments captured me immediately. Vocals usually have to be really good to impress me.This is not one of my favorite vocals, but also it is not one of those that I avoid to hear. Its a good mach and its ok for my ears.Tribal moments aren`t omitted this time,and because of that track is very rhythmic. Trancy lead that comes later is fantastic all together with falls that creates easy tension in track. Totally positive. I extremely like this way of track arranging, because I love when story goes spontaneously and easily rise until it reaches the limit, so even the breakbeat of track is not disturbed with some complexity and inarticulate moments that are in today production very frequentative. The emphasis is on rhythm which with his own appearance and dissappearance emphase the ride. It doesn`t make euforia and that is quite ok.

4. Helium
This is the classic progressive beginning of the track. It was very often in tracks from 2005,when progressive trance became more popular by my oppion. There is no diverges from main theme of album with this track. Progression is ideal from track to track. When I'm writing a review of some track, I love to use comparision-this is one of the compositions that are very similar to Ticon album "Zero Six After". Very good. The appearance of electro lead opens more brighter themes and on moments it leaves behind some deep variations.This high elements are maybe too much overstated, but that oscilate with further movement through the arrangement.It is energetical and rhythmic. Let`s say that this track has for now, the most brightest moments in term of themes. Very good.

5. High Voltage Guitar
The beginning is totally DJ-friendly, great for mixing. It gives enough time to Dj to make nice intro to the rest of the story. Many house elements,and even with the arrival of basslines which are darker and harder this is still house style. Let`s say that this track is one of those that can be used in Dj set to bridge from one style to another. I must admit that this track is great for using as DJ tool.Especially if we allocated parts from the beginning of track and those from the middle of arrangement. Part that included break has great falls by sound and midi records. Again, calm and easy, but on the other side very energetic access. Simulation of guitar solo is solid. I say solid because i don`t like when guitar takes a part of electronic music. But in this track, luckily, there are no riffs, just short and discrete solo parts. My only objection is that this tape abruptly goes off.

6. Distant Visitors
This is definitely the best rhythm that appears on the album in last 6 tracks. Bassline is also great.I love when bassline has this "baloon" sound. Further synths which characterized this track by many things remembers me on tech house tracks, so if we dynamically "calm down" this track, it will become, without any problems a part of some tech house set. There are a lots of elements which are indicating that style. As track goes further and further it gets in trance style which is spark of this track, apropos-some kind of upper for those who loves a little more distorted sounds.

7. Night Vision
With no diverges of tribal parts, we continue this trip through the second part of album. About bassline... Judging by the beginning of the track, I expected different form, although that this starts after couple of seconds and is the one that goes on the right way. Thing that I don`t like in this track is crash, but forgive me, maybe i am just too much in details. In principle, for many people these things are negligible and they don`t pay too much attention. Drive is extraordinary. Theme of this track hits me in my foot and fusillade me right in to the heart.

8. Science is God
Full trance ambience! If someone played this track to me and said to affect who is it, I'll be convinced that it is Andromeda or Antix. It is totally in that kind of trip. I don`t know if I mentioned this before, but if I did, it won't be bad to say it again-I really appreciate when, throughout rhythm, main role have timpans and infiltration of kongs as supporting elements. Rhythmics is somehow full, especially with full bassline and deep pads that are followed by short, ringing melodies. A remarkable combination of deep,low and high frequency.Everything comes to intense, just like it should. Melodic elements are soul of this track,and because they are beyond everything and they perfectly navigate the story.

9. One Shot (remixed D-Nox & Beckers theme)
If you are remixing one perfect producing duo, and if that remix is great-that is what I call good stuff. From some, filtered upcoming element behind which you can hear bassline how it's raising, you can recognize that, so-called, "disco" style. Amplitude of track is now on surface. Dynamic is not falling, not even in one moment. Melodiousness of this track can`t be questioned because this track is filled from every side. Pure club imppessum. Very well-rounded compostion without any deviation in any line of arrangement.

10. Confused Heart
I can guess, with this starting rhythm, that here is a word about some downtempo version of track which is usually puted to the end of album.Nice breakbeat rhythm and progressive trance parts through the whole track,slowly obtain and finish the story of album. Ambient character is easily recognized. Totally fine composition for the end of one complete whole which was presented by this album.

For all lovers of progressive trance sound, deep and rhythmic parts, this release is highly recommended in my opinion. One big thanks to Dance 'n' Dust label for releasing this wonderful album and make very good reason for both club and festival fun on the podium. Enjoy!!