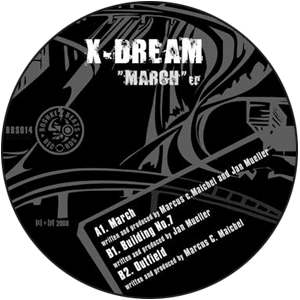 Since the first time I heard the samples of this release on Boshke Beats web, I waited so much for it to come out, take a sit and listen to the whole release. A few days ago, I got a vinyl form one of my friends from Japan as present and I started to listen. Here is what it feels like...

From the very beginning, I respect X-Dream as artists so much. The change of so many different styles in music and few times starting a revolution in electronic music. Therefore, this time, again, something that presents X-Dream sound, but in a new way.

1. March
Warm start of a kick and the silent dirty sound in background imply on a new fresh progressive techno sound that we can hear lately. Electro motives come easy and in the finest way, and then full bass pleasure start. The track goes, but from the very first beginning, the listener knows that it will have hard and deep sub ground kicking moments
Somewhere after 2 minutes, Marcus and Jan wake up the listeners and still slowly, but knowingly break the limits off every sounds system. The moment I felt those sweet chills all over my skin is the moment when bassline change note on octave and suddenly goes through the filter down in low cut and go out like from the basement. Creepy noise that sound like some kind of a synth which is slow at last few notes, give the best power drive to the whole theme in track. Oscillation on the pad that presents the bassline also has big part in track. It actually makes the drive of a bassline, like big wave which non-stop go forward and announces that moving. Something like a side chain. In every direction, this track deserves to win a price for one of the greatest club monsters in 2008, for now!
10/10

2. Building number 7
Hah the name of the track inspire me, I must admit before I say anything else. Late, I realized that sound is totally fit in the track theme. I trip like that. Does not mean that the rest will trip the same thing. So let us go back on sound, vinyl gives the special one in that case, and many more of course. Even if I don't read who wrote and produced this track I would know that Jan had much influence on this track. Electro sound is more his style in producing music. In addition, electro vocals fit in this track so so so so good!!! Especially the part where word "seven" repeat separated from the rest of the channels in track. Very much like that kind of old computer sound, like old analogue machines, hand made
So many bells sounds that contain the highest tones inside. Melody in track is also totally electro and fits in every part of the song. It reminds me on Kraftwerk but style that is much more modern. The most interesting thing in this track is that, many DJs sort music by tracks for start, tracks for middle of the set and tracks for the end, I'm not a DJ, but in my opinion this track can fit in every part of a set. That is what I appreciate in tracks.
8.5/10

3. Outfield
SUBWAY!!! The first thing that I have on my mind since the track start! At the moment, I start to image the frames of a potential video for this track. Sound that represent bassline is so hardly delayed. Marcus school, no doubt
Bell that came up from the darkness of a tunnel sounds amazing. Everything fits in its place!!! Ambient sfx put whole atmosphere into a feeling like in a real subway. I must hear this track on my next ride in the sub
This track needs walls to be the right thing. Club, more then open air. However, as a whole this release, it have lots of element for open air location too. But, it has to be at night!!! Fantastic track, just too short as the first one. I like long entrances and epilogues. Actually, I like long track themes. But, this is fantastic also!
9/10

Conclusion:
So refreshing! The best thing is that it fits in sets from minimal and progressive techno to tech trance DJ sets. BPM rate is phenomenal. In the right place. Moreover, as I said above, it have lots of element for open air locations as well. That is very valuable to me. I rate tracks based on my taste on this release, but the whole release is rate 10/10 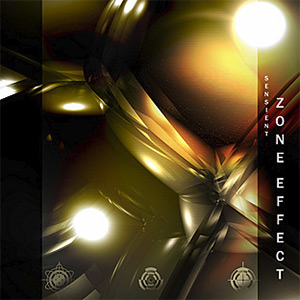 Hello boys and girls who swim in tech waters. Long time no review from me. Lot of work to do, etc, etc.

After many releases starting in 2008 this one is real refreshment for me. I got a release to listen from my very good friend, 'cause he knows that I like tech trance and night progress and after I read that it's Sensient CD I became more impatient to hear it.

1. Zone Effect
SOOOOOOOOO DRY and have great groove. It starts like a bit faster tech house with vocal sample. One of those that your mind creates on your will. You know for sure, when you're on the party and music flows and you hear one of those cut vocals that plays in loop and create some word, which actually exist just in your head. A moment of psychedelic part breaks the illusion of a house part, no matter the beat and it's like he announced harder style which is more closer to tech trance then tech house, but with progressive groove line. And GO! Like reversed kick, bassline does the PUMPING!!!
It's still dry, but has a great psychedelic connection with upcoming FXs which constantly go round and round and make this drive more perfect. Like factory atmosphere. Put it, put it, put it... Breaks in tracks are simple and that's how it should be. The point of this kind of style is the story & simplicity. I don't like upcoming vocal after 7th minute, but this is the only thing that I animadvert, so, not that big deal. Pretty Super track!

2. SideStep
Dirty Splash Distortion with dark atmosphere. Ummmmmmmmm I like it already. After first track, second must be THAT in case of EP! And more pumpin' bass (feels like other kick) that from the first track tells me that I'm not wrong. Again, plays with FXs that actually tell you a story. That's what I like in that kind of style. No melodies (which doesn't mean that I don't like melodies) to explain what artists have to say. Very rhythmic and dance. Like in tunnel, a Jungle. Definetly, this is minimal music and review should be minimal, 'cause some music must be heard to get the point of it where some music can be described with words.
From 5th minute great break and confusing moment till 5:39 where upcoming female vocal totally lift up the atmosphere and make ecstasy in the track. How can the same beat from start make a better drive? Knowingly for sure, like he have 26 years of experience not life. End of track is one of those I like to call "make it easier for a DJ to mix it up with the next one" and that kind of ending I respect and like.
Because of the vocal at 7th minute in the first track: 9/10