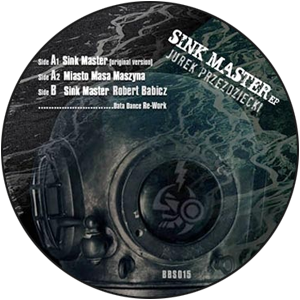 "Knock Knock, Bang Bang! MinimalNeoTechDrama is just kicking your doors off! 5,4,3,2,1 Action!"
hehehehee... I like that kind of introduction for sure. From the start I know there will be something really interesting inside. It's about an artist from totally well-known project to the audience from spheres of techno trance & minimal sound, Jurek Przezdziecki from Poland. When I already mention that he play in that project I should also tell which kind of project that is and I suppose that some of you will be supprised, like: "Hey man, I didn't know that he plays in BigWigs and with that guy from Kino Oko", or "Awesome dude, this is the guy from Epi Centrum, project that kicks ass on '5 tone of flax' from Mechanical Dragon", or maybe "Hey, I've heard this guy on Midi Miliz Green remixes for Boshke Beats as Mass Turbo, it's awesome". Yeah ppl, this is same guy that now presents his debut EP on Boshke Beats like Jurek Przezdziecki. Let's see what is inside of cover...

Side A1 Sink Master (original version)
So, let's introduce ourselves with the very nice start of track. This is the style that Boshke prefer, of course. Not so hard, not so easy. Club vibration. After a while I noticed one keen sound that I like and after that engine started! Rubber bassline in sub frequency in full strike. I like deep basslines as well. Always carry the whole track and other parts of song, have much space to express themselves without any overlaps between sound. Lots of shorts samples in rhythm inspire me to dance. I like full groove pleasure. Now, in this kind of style, beside of melodic lines, you can quite often find parts where some rithtmic elements play the "melody" in track. In this track that part is played perfect. The thing that I notice here is that this track have a great flow and composition. In every moments you can feel how lifting moments rise and rise and coming down and drive and drive and next moment start to lift and lift up and up and up and dooooooown and down and down and I'm in paradise No, seriously, this is the kind of real club driving. Totally! I can't imagine what will happen to me in the club, bigger space, bigger sound system and more surround then at studio. Why you need more reason to buy this record after this track? If You are DJ of course. Consumers looking for more then one track .. So lets check rest of...

Side A2 Miasto Masa Maszyna
By the very first sounds that I hear, I can guess that will be a bit calm then the previous track. It's ok for warming at club but in my opinion this is more a "for home listening" track then for the club. But, depends how you look at it. There is so many ppl who would not agree with me. This is just my opinion. Why? Well, for me that sound from the second track is more relaxing and "armchair" driving. Close to end, track become a bit wilder. On that part I can start to move my feet. First part is more for head. Sounds from this tracks are amazing because I like that rubber and tongue moments and this track is full of that sound!

Side B Sink Master (Robert Babicz Data Dance Re-Work)
Re-Work stuff, yea! I like rivalry on one release. Pure thing! Perfect Kick!!! Perfect! Sound that starts with kick after awhile is also so syntethic and glitchy! MMMMMM my cup! And then Full Bass that fill me up totally. In the club again! And then lots of ploppy efects and I'm smiling! So much wonderful energy. Stamp! Stamp your feets! I give, but just for a bit, advantage to original mix just because I like more wideness expression. Maybe this is because of fatter bassline in first track and lot of splashing sounds. But as I say, this is almost irrelevant advantage. Must check it in the club. Both tracks!!!

What can I say except that I must check it in the club and second track to convice myself in my theory. Am I right or am I wrong. Anyway, we have here one magnificent release that I really like and that's to everyone involved in this! And it's totally payroll, for DJs that have full release for DJing, if not full then not below 2/3, which is perfect indeed! For consumers total full release without missing any track. This is what I feel about this record. If someone have something to say about the same theme, I would like to read and exchange expiriences.
Put the needle on the record. 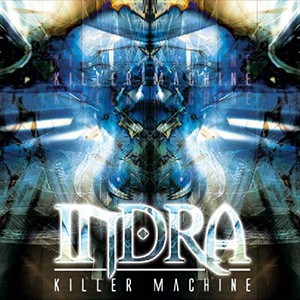 2006 brought us new creation such as full-on, a popular style of inovative trance music. For a well known label Spliff music from Israel which is into publishing rich electronic sound full of trance melodies. This time, many of the dance floors across the planet will be fired up by the sounds of one Spliff Music team artist's new album - INDRA in the new Psy thing called Killer Machine!!! Ten tracks of quallity production and length will be swallowed by players of many parties and festivals across the planet. So, lets see what music news this well known and respected artist brought us:

1. Man on the Moon
As soon as inserting the CD in the deck, I was wellcomed to the world of dance sounds by a beautyfull lead line followed by windy FXs and vocals like in a tribe, and soon after by an energetic kick which predicted total madness. Ans so it goes, a line of efects that are moving up and down through the parts which are ornamented by etching kick and rich bassline. The presence of melody is highly emphasized only in cut variant all the way untill the beginnig of the 2/3 of the track where the beautyfull motive filled with distorsive color of average lead, which is frequent in todays production of this kind of trance, enters. Like in many other cases, main break here is not the main thing so myexpectations were not paralel with todays standards which full on nominates. That didn't infuluence the dynamics of the track which ends in a dynamic way.

2. Come to India
As the name suggests, with this track, we travel all the way to India. The motives are the same as ones from east cultures. Phenomenal female vocal followed by energy and dynamics all along the track, drives throgh the parts filled with strong melodies caracterized with acid colors. I would ephasize that this track has less of the psy motives then the previous track, and is more like for dancing.

3. Dance floor
At the very begining of the track, the author announced the rest of the track. Standard bassline which follows the spectrum of melody gives no relaxation just as in previous tracks. The album continues melodically and energetically in the same ruthm and as far as i'm concerned, it lures listeners to keep dancing. Melodies are more complex then in the previous tracks. The sounds of older instruments such as TS 404 are immanent which gives the impresion that the author was fond of old kinds of sounds. Very paranthetic overall. The thing i didn't like was vocal which is present in the whole track.

4. Drop Poisoned
The sample predicts darker athmosphere. If i didn't know what album i was listening to, i would've thought that it's some kind of dark project. Comparing this track to previous ones, it can be seen that mini-breaks are more often and the usage of filters which oscillate from phaser to flanger is frequent too. After a few calm moments in the track, which rather steer the track to the explosive directon, the whole impression is improved by a melody, which is rather calm, therefore i realised that the whole track would remain calm comparing to other tracks. Let's just say that the middle of the album is the thing that calms the whole act before the "main course". However, i have to admit that the track in some moments deviate from what i felt.

5. Killer Machine
So, we come to the carrier of the album who is puropously put in the middle of the CD. The short intro and "start to dance". Bassline is too melodical for my taste but, acid sound is the one that follows and completes my feeling so i can feel the bassline the right way. The soryline goes smoothly although i had an impression that i am waiting for the long time the main break which came and went on without leaving any impressions that would "name" the album the same as this track. However, the dynamics correct the situation and for a moment breaks the feel softness. This track didn't leave so much impression.I guess i was expecting too much.

6. Fritai To
With some interesting ambiental downs and computer-processed vocals, Indra takes the album on the same path, except the fact that more psycodelicness is present comparing to other tracks. But not too much. Fullon is fullon . Breaks, melodies, bassline and other elements are present as allways. I am not a big fan of "half section loop breaks" but they are present here and they give a certain character to the track.

7. Svetech
I wouldn't commentate on this song too much because I didn't like it anyway, so I will leave the judgement to the listeners.

9. Shipment Servings
The tension of the album, that went down with the "main track", is back with this track. Again, the essence of trance motives which are spiced with recognizable colors, and the rythm, which is full of many precusions, are present. The best melody is the one that has europian motives and is like europian music itself. The melody for dancing is certainly going to bring some people to the dance floor and leave them there 'till the morning.

10. I Make the Music Man
The last song is "Bull's eye". Last part of the album is better then the first. I like melodies so much so i could characterize this track as a good "sign-out" from the album. The morning motives, the sunrise and a rise of one good live-act performance.

Overall, the album deserves more interest than usual. From a general point of view this album is the heven itself for a crew that likes this kind of sound. The production, as the high level of samples, is enviable. Although this isn't the kind of thing that sends me straigth to the dancefloor, my mark for this album is 8!